Save Online Advertising by Killing It

You just want to read your horoscope in the morning, but are constantly pressing to close that pop-up ad. Or on YouTube, when you have to suffer through 15-seconds before you can watch the latest viral kitten video. Click-through rates are down, web experience is negatively affected, and ad-blockers are ubiquitous. A consortium of ad, publishing, and tech companies has a plan. It wants to save the online advertising industry; by killing it (well parts of it).

Ironically, you hate advertising, but it supports the content you are accustomed to. This includes free services, fearless journalism, and social platforms that span across the web. Nevertheless, the online ad experience now falls short of consumers’ expectations. It often disrupts your daily web experience by delaying access to content. It’s annoying, plain and simple.

The “Coalition for Better Ads” wants to create a balance between the battle of ads versus ad-blockers. The coalition has discussed, and is pushing for the pre-installation of “selective ad-blockers”. Browsers like Chrome and Safari would come with built in blockers. Currently, users have the ability to install third-party ad blockers. These ad-blockers serve as white-out, removing all ad-banners, pop-ups, videos, etc.; emphasis on “ALL” ads. To date, the Coalition has conducted research, identifying preferences for different types of online ads. Through this research, it identified ad types highly correlated with an increased propensity to install ad-blockers. Its pre-installed ad-blocker would only block these highly intrusive types, leaving others on your screen.

To identify which ads annoy and frustrate consumers the most, 25,000 consumers participated in the Coalition’s survey. The research included 55 ad “experiences” on desktop web and 49 “experiences” on mobile. Consumers  read articles on four simulated pages with varying types of ads, and rated their experience. After merging personal preferences and ratings, the Coalition identified the following four types of desktop ads and eight types of mobile ads that fell beneath a minimum threshold of acceptability. 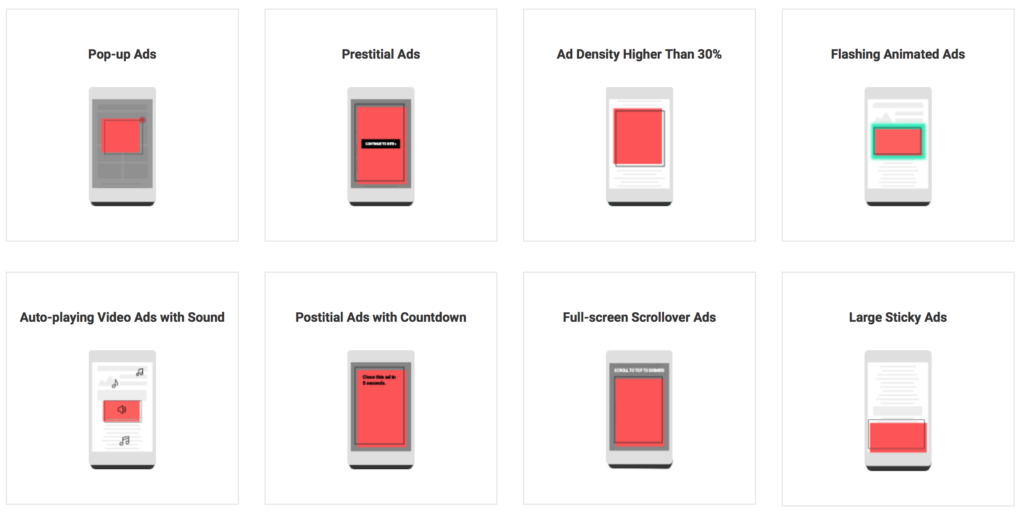 By identifying the “worst-offenders” of annoyance, advertisers can create content that is less intrusive. The hope is there will be a correlation between less intrusive ads and third-party ad blocker installations; less annoying ads, same great content, and a better internet for all.

Both Apple and Google are looking to implement forms of built-in ad blockers. A new feature in Chrome will block ads Google considers particularly intrusive. In the new Safari rolling out in Mac OS High Sierra this fall, Apple will automatically block autoplay video advertisements and prevent those creepy instances ocross‑site tracking data.

Discussion about specific ideas is ongoing, and it may be six months to a year before any pre-installed ad-blocker appears in your browser. If you are interested in using a third-party blocker for the time being, I recommend AdBlock, which is available for Chrome, Safari, and Opera. For your mobile phone, I use Crystal Adblock ($0.99 on the App Store).

Before you start downloading, remember that by blocking ads you are depriving content publishers of advertising income and insights. For some sites that don’t require paid online subscriptions, this is their only source of income. It also occasionally messes with the layout and spacing of the design of the website (cringe-worthy offenses for the people who work tirelessly on their sites UI).

The main reason I use an ad blocker is for privacy rather than convenience. Most ads are fine. The problem is there are a few bad apples in the orchard. Last year, mainstream sites like The New York Times and NFL.com accidently showed ads that contain malware code. Further, I can not tell you the number of times I’ve received a worried call from a grandparent after they received a pop-up ad saying they need anti-virus program. If the Coalition really wants to make third-party ad-blockers obsolete, it is my hope they also turn their attention to scourging these “malvertisements”.

It may sound strange for advertising companies to embrace ad-blocking, but it is an existential issue. Presently, 26 percent of desktop internet users (a 400 percent increase since 2013) and 10 percent of mobile users have a blocker installed. The rise of ad blocking comes just as the media industries of old have settled on a revenue model centered around free content supplemented by advertising. Advertising (and income generated from it), metaphorically, and literally keeps the lights on for some businesses. Selective pre-installed ad-blockers offer the chance for an unobtrusive user experience, they are a necessary compromise. After all, if you can’t beat them, join them.