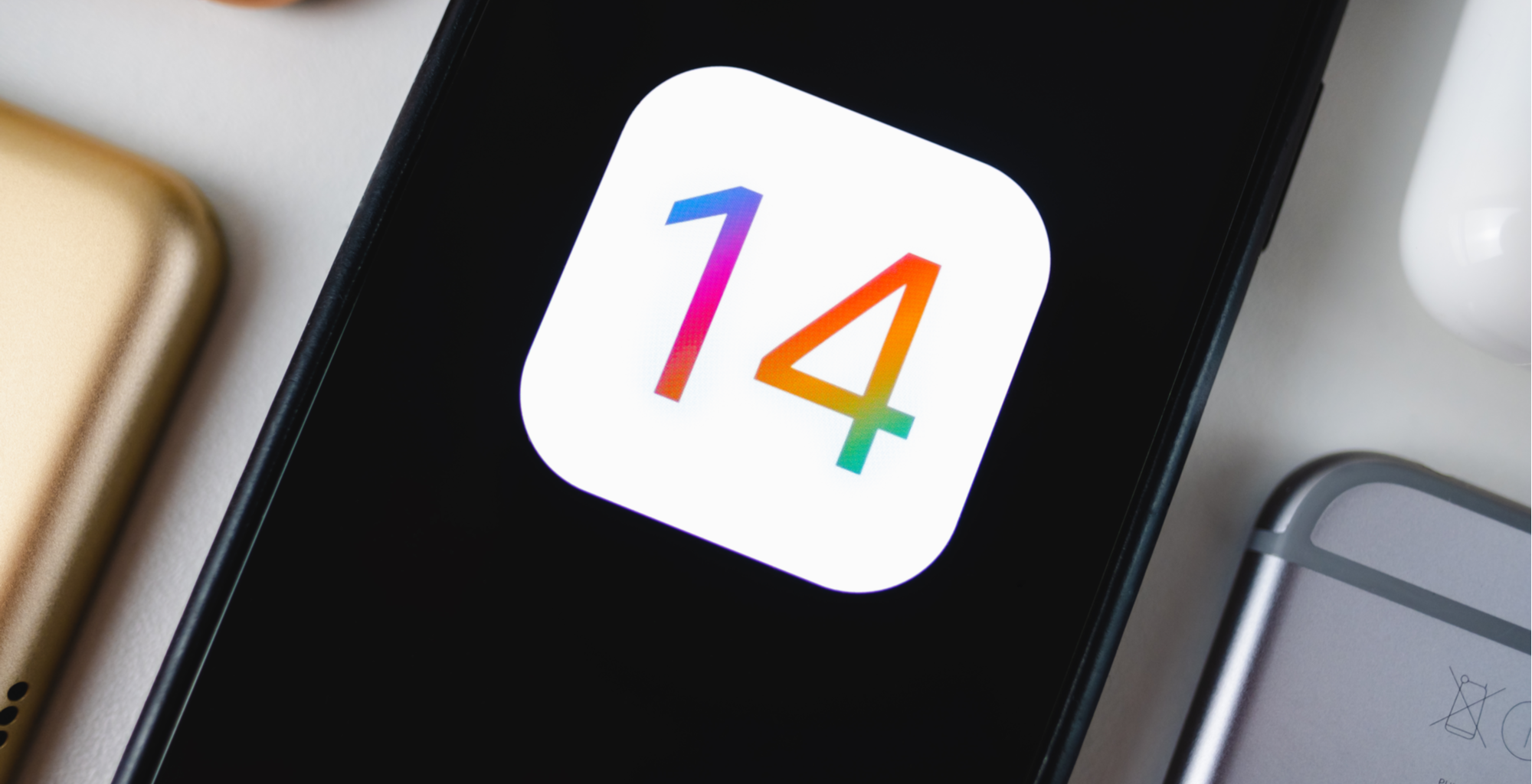 Apple and Facebook’s fight over the future of online privacy

What happens when an immovable object faces off against an unstoppable force? While this cold-war like dynamic has been playing out behind the scenes for years – Apple CEO Tim Cook’s iconic “I wouldn’t be in this situation” in relation to Cambridge Analytica’s privacy violations, Zuckerberg banning his upper-level executives from using iPhones, Apple cutting off Facebook’s developer certificate, and Zuckerberg reportedly claiming “[Facebook] needs to inflict pain” on Apple – the impending release of iOS 14.5 and its App Transparency Tracking feature has brought the Apple vs Facebook battle to the forefront. Apple and Facebook’s online privacy battle and its outcome will have significant ramifications for the future of the mobile internet, as well as implications for how brands and digital marketers go about crafting campaigns and speaking to their potential consumers. But before we begin, here’s a quick overview on the privacy history between Apple, Facebook, and what the heck an IDFA is.

Without any significant or meaningful federal privacy laws in North America, the role of regulation has fallen upon these nation-like corporations. Apple and Cook have leaned into this role, saying that “[they] believe that privacy is a fundamental human right”, and have been adding features like end-to-end encryption, restrictions on cookie usage, privacy “nutrition labels” for apps, and more to their operating systems for years. It’s a brilliant brand play to further differentiate themselves from their fellow big-tech data auctioneers:

Its biggest stance for privacy yet is the introduction of App Tracking Transparency (ATT). Originally part of Apple’s iOS 14 release in September 2020, but delayed until 2021 to allow developers like Facebook time to prepare, ATT will be introduced as part of iOS 14.5 this spring. In simplest terms, ATT will change tracking across apps from opt-out to opt-in.

Mobiles devices have what is called an IDFA – Identifier for Advertisers. IDFAs are a randomly generated device ID that companies use to identify users as they switch across apps, allowing them to pinpoint user actions and behaviours, and follow suit with tailored ads and proper campaign attribution.

In the old version of iOS, users could deactivate their IDFA for apps, but had to do so manually; requiring the difficult task of navigating their iPhone’s device settings to find the Limit Ad Tracking function. In iOS 14.5, apps using a device’s IDFA will have to present users with a dialogue box asking them for their explicit consent to use their IDFA. This dialogue box looks something like this: 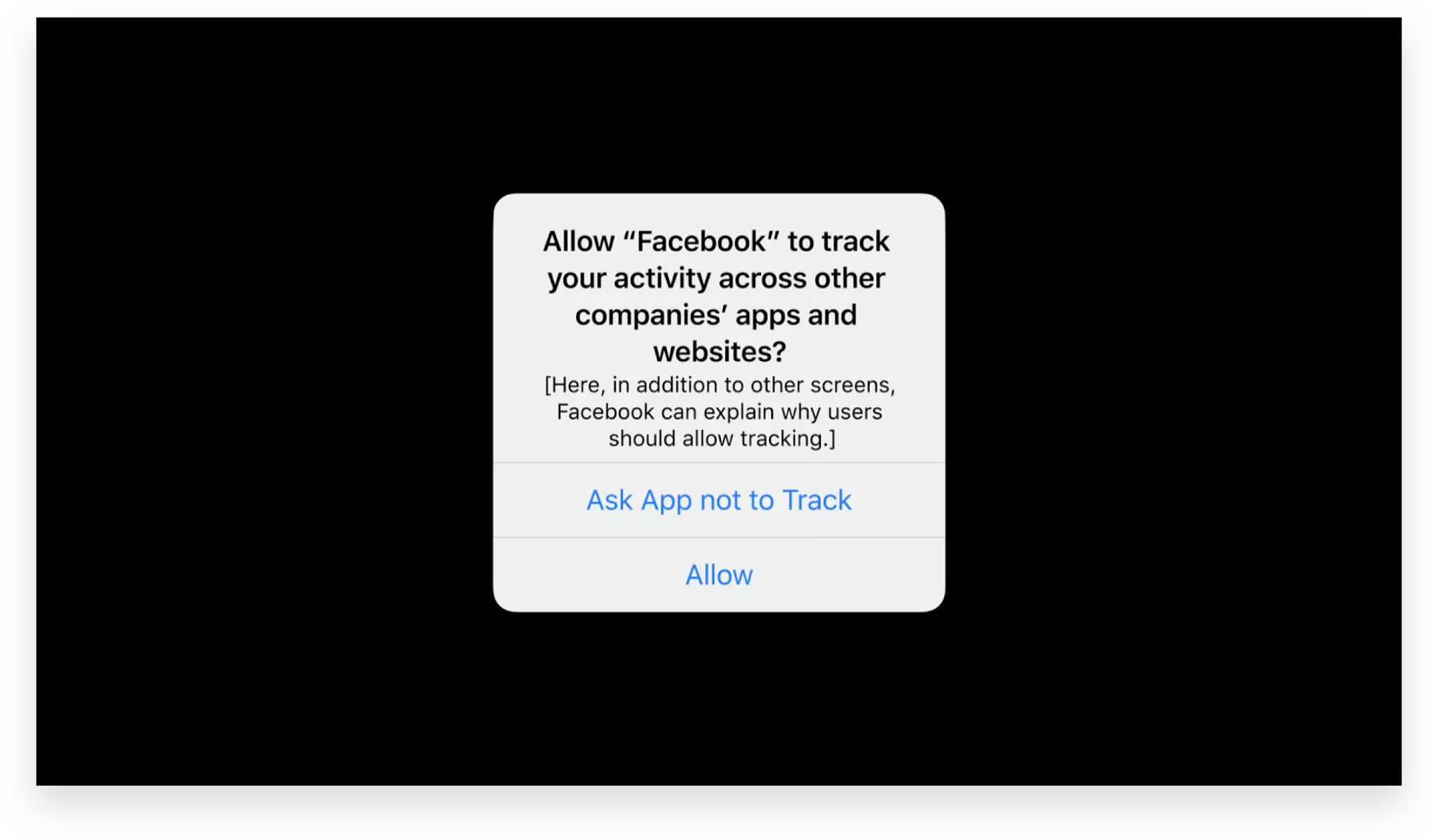 Each app will get a chance to position to its user why allowing tracking is of benefit, but they will only get one shot at this. Once a user makes their decision, the app cannot ask again, unless it is deleted and reinstalled. It is currently estimated that fewer than one in four people will allow apps to track them if given the choice.

The Zuck strikes back.

Facebook, a company that few would say has historically been a major proponent of user privacy, is obviously against Apple’s ATT rollout plans. In 2020, 97.9% of Facebook’s $86 billion in revenue was generated from advertising. One estimate warns that the change could see Facebook lose up to 7% of its total revenue. 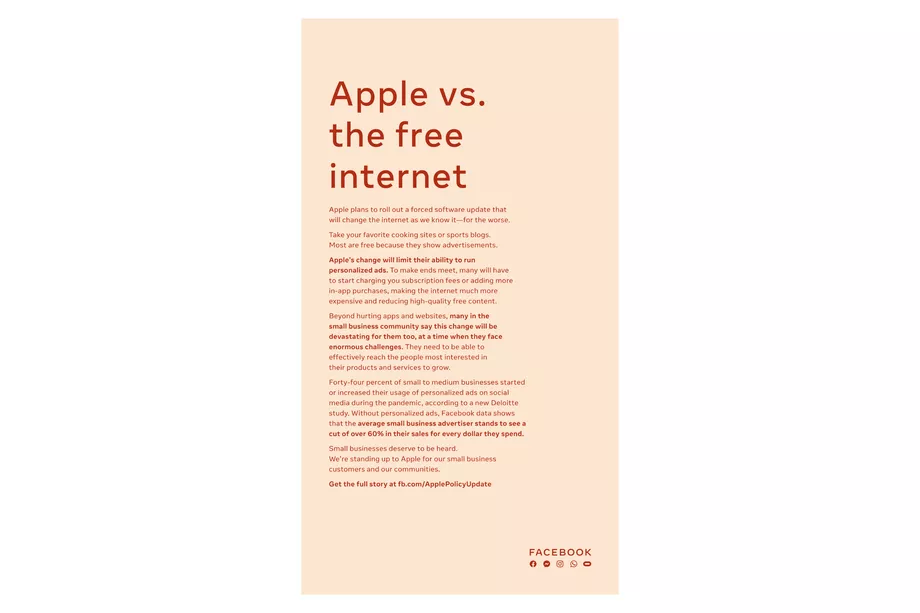 Apart from Facebook’s obvious concerns about their bottom line, they do bring up legitimate concerns about how the loss of personalized ads will affect small businesses and other brands that use its ad platform. In an ongoing PR blitz, Facebook has taken out full-page ads in newspapers and launched a website with testimonials from small-business owners about how Apple’s change will hurt its ability to reach specific customers. Facebook claims that non-personalized ads would generate 60 percent fewer sales than personalized ones for small businesses that are already hurting from the ongoing pandemic restrictions.

But how will this affect YOU as a consumer and YOU as a digital marketer?

To be honest, as a user… not much. Other than having some additional privacy options, the ads you see in your apps and social feeds won’t be going away, they just won’t have as much access to your data to target them and as a result, will be potentially irrelevant.

As a marketer… quite a bit. Facebook and other digital ad platforms will obviously attempt to create workarounds, but in a day-to-day perspective, the introduction of ATT will have key effects on your campaign’s ability to target specific audiences and measure its attribution:

Many forms of targeting (specifically using retargeting audiences based on IDFA) will no longer work for users that have opted-out. Marketers using Facebook and Google’s ad platforms will have other deterministic variables like email or phone number to identify devices/users and still identify these audiences. Facebook has already tried to preemptively trial its own limited privacy mode called “Limited Login”. This mode launches a pop-up that notes the benefits of data tracking and personalized ads, with the idea that consumers will be less intimidated and more conditioned to the benefits of allowing Facebook access to their IDFA, when the ATT prompt does appear this spring. For other programmatic ad networks that lack this deterministic ID (think traditional web display banners), marketers may need to shift back into the mindset of targeting publishers/websites based on interest and less on identified audience. I.e., rather than knowing that this is “Ben Rudolph” and serving him a personalized banner ad, you might only know that this “individual” is reading Wired which is a tech news site, so we should serve an ad-based on who we think reads technology news.

The majority of campaign measurements are performed by Mobile Measurement Partners (MMPs) that deliver an assessment of campaign KPIs. Today MMPs build their measurement and fraud capabilities on the IDFA identifier. Obviously, it is still paramount to determine campaign performance, so Apple has announced an iOS replacement called SKAdNetwork. This more privacy-focused advertising platform will allow ads to be registered with Apple and still give the advertiser proper KPIs to track and attribute clicks, installs and purchases; it just won’t include information that can be used to identify the particular device or user at a granular level.

As a marketer, richer and more personalized data is clearly desirable. Obviously, it’s better to have a marketing campaign that puts ads of Darth Vader branded yoga mats in front of someone who loves the Star Wars movies and working out. But as consumers increasingly become more knowledgeable about the ways big-tech companies collect and utilize their personal data, such practices are no longer consumer-friendly and are not even necessary for corporate growth. After all, brands existed and grew in the pre-internet market age, no? In fact, I would argue that digital advertising is more of a tax on brands. A necessary pursuit since your competitors will use it if you don’t, but one that few brands have used to create legitimate brand differentiation in the same way television, radio, or even flyers did for brands of yesteryears. In recognizing the shifting tides away from omnipresent tailored advertising the most important thing a marketer can do is make sure your consumer truly understands the why and benefit of not only your products but your brand; that will always win out.

While Apple’s ATT is not a panacea, it is a step in the right direction and I will give the final word to Tim Cook, who sums it up most elegantly: “Technology does not need vast troves of personal data, stitched together across dozens of websites and apps, in order to succeed. Advertising existed and thrived for decades without it. And we’re here today because the path of least resistance is rarely the path of wisdom. If a business is built on misleading users, on data exploitation, on choices that are no choices at all, then it does not deserve our praise. It deserves reform.”