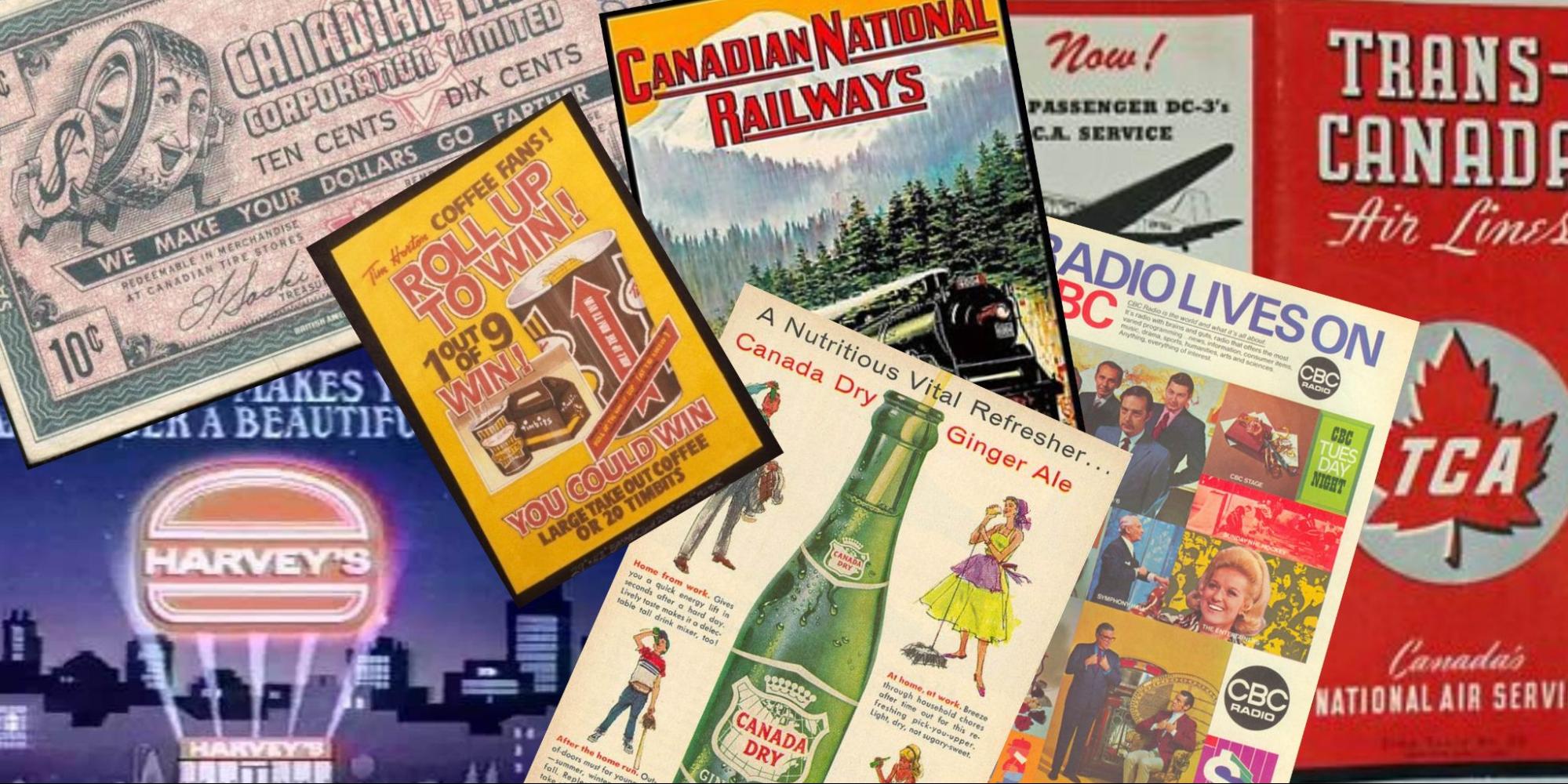 Consider the last time you were on a road trip in Canada. Maybe you were camping, cottaging, or visiting family. Now consider some of the advertisements on the side of the highway—Harvey’s in 2km; next exit, Tim Hortons. Great Canadian logo design has a tendency to get upstaged by more widespread American brands. But, just because we share elements of our culture with our neighbours to the south, doesn’t mean Canadian logos can’t be just as influential.

Here are some of Canada’s most iconic logos as you know them today and how they have evolved over the years: 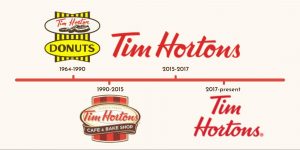 It would be foolish not to start with the most widely recognized Canadian logo. For a brand that’s nearly 60 years old, the logo has gone through minimal changes. The foundational script of the logo was based on NHL hockey player Tim Horton’s signature and is the element that has barely changed at all for decades… Except for one small change… Can you spot it? (Hint: check the T!) Whether or not you’re a Tims coffee fan, this logo is sure to stir up some nostalgia. 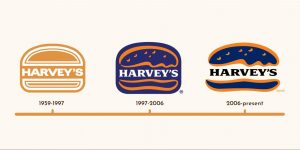 “Harvey’s makes a hamburger a beautiful thing.” The logo and the slogan go hand-in-hand. Like Tim Hortons, the Harvey’s logo has barely changed in 20 years. The streamlined evolution from the 1959 logo to a more stylized version of the hamburger is reminiscent of those wonderful 1980s “festival marketplace” style murals on the walls of old Harvey’s locations (Did I make this up? Were those murals a fever-dream?) In some ways, the original logo feels more modern than the more recent logos… Perhaps it’s time for a renaissance! 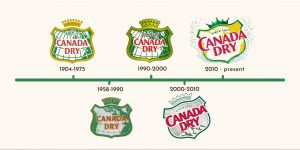 Introduced in 1904, the Canada Dry logo includes a crown emblem and a map of Canada, features that have remained for over a hundred years. While the original logo was used for 70 years, the 1958 rendition was actually redesigned by Raymond Loewy, an French-American designer dubbed “the “father of industrial design”, responsible for early Coca-Cola packaging, the Shell logo and the Studebaker Avanti car. 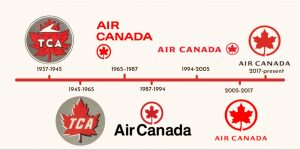 From the logo’s early Trans-Canada Airlines days to the most recent iteration, the maple leaf has remained a centrepiece for the Air Canada brand. This logo evolution is all about balance between the graphic and text. The 1965 logo is left aligned and favours the text, while the 2005 to current day logos favour a larger, centred graphic for a more balanced feel. The 1965 design repurposed the circular design of the earlier logos to create the classic circle around the maple leaf which is brilliantly and simply evocative of travel. 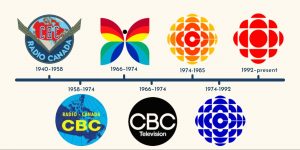 The history of the CBC logo begins with Hortense Binette, an École des Beaux-Arts student who, in 1940, won $30 for her design submission. The colourful 1966 logo, designed by Hubert Tison, “mark[ed] the network’s progressing transition from black-and-white to colour television”, beautifully illustrated through the metaphor of a butterfly. In 1974 graphic artist Burton Kramer designed the most notable CBC logo, often referred to as the “exploding pizza”. While perhaps less literal than the previous logos, it features a C in the centre and, when animated on air, morphed into focus like a kaleidoscope. 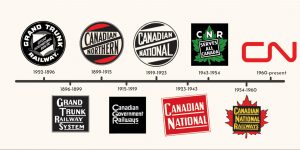 Possibly the most emblematic Canadian logo; the simple CN design hasn’t changed since 1960. The logos that led up to the one we recognize today were an amalgamation of associated railway and transportation companies, including the Grand Trunk Railway System, Canadian Northern Railway and Canadian Government Railways. It’s surprising how modern some of these early logos look. However, in 1959, Dick Wright, head of Canadian National PR wanted a new logo to push back against the popular belief that the railway company was old fashioned. Popular young graphic designer Allan Fleming was hired to redesign the logo. The story goes that, while on a flight to NYC, Fleming hastily sketched the logo’s concept art on an airline cocktail napkin. His sleek, modern and harmonious (and even bilingual!) design has well outlived the others and, by the look of things, may be the only logo CN ever needs! 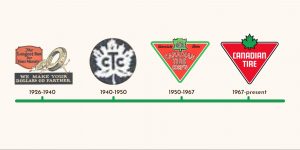 I always say that Canadian Tire is my favourite store. Incredible deals, great customer service and a timeless logo. What more could you ask for? Believe it or not, the inverted triangle wasn’t always the hallmark of Canadian Tire. In 1926, the logo was an anthropomorphic tire running alongside his little anthropomorphic coin friend. As hilarious and unsettling as this logo may be, it was succeeded by a simple maple leaf with the Canadian Tire Corporation initials (quite similar to the early Air Canada and CN logos!) This design was only around for about 10 years and, consequently, is hard to find on the internet, as evidenced by the quality of the image. By the 50s, the earliest iteration of the red triangle was put into play. According to this tweet, the logo was chosen for the front of an oil can!

Are you looking to evolve your logo or branding? Get in-touch with our experts. 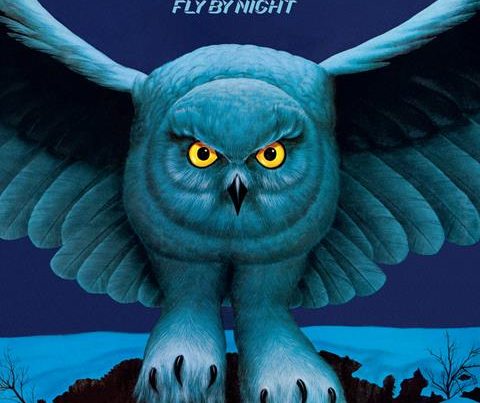 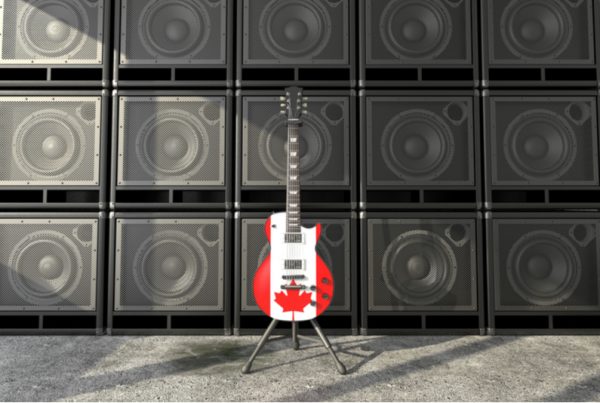 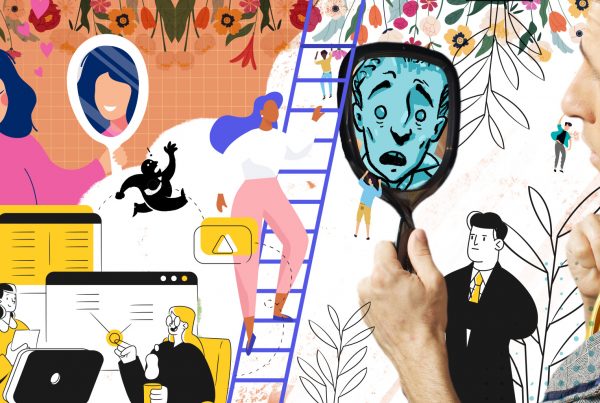